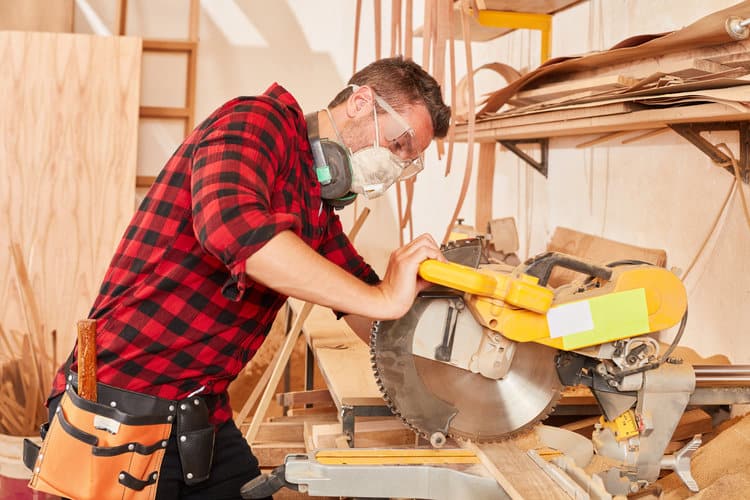 Choosing the right saw for your woodworking projects can be confusing.

We’ve all been there, haven’t we? You’re ready to buy a new power tool, but you don’t know which one is best for your needs. And then you end up buying two tools because neither of them is exactly what you wanted in the first place. It’s frustrating and expensive.

Check out this blog post that compares miter saws vs chop saws so that next time you go shopping for a power tool, it will be easier to make an informed decision.

What Is a Miter Saw?

A miter saw is a powerful, portable, compact tool. The name comes from its ability to make crosscuts (cuts across the grain of the wood) and beveled cuts (cut at an angle). It’s better for cabinetwork or any project that requires accuracy. You can use it to cut molding around windows and doors as well as baseboard, crown molding, panel molding, picture frame pieces, and shelves.

What Is a Miter Saw Used For?

The most common reason people decide to purchase a miter saw is for basic cutting tasks like cutting 2 x 4 boards down to size or making decorative moldings for cabinets. But because it features accessories such as guide poles and various blades, there are many other jobs a miter saw can perform.

A miter saw is one of the most versatile tools you can have. It can cut across the grain, make angled cuts and it is fairly accurate. Keep in mind that its capabilities are limited to cutting smaller pieces because of its size and motor power. The great thing about using a miter saw for any project is the many accessories available such as guide poles and various blades. These accessories allow you to do tasks such as ripping boards (cutting them lengthwise), kerfing (cutting thin strips from wide boards), dadoing (placing grooves on your workpiece), and making moldings. Additionally, the parts of a miter saw are easily replaceable and customizable to suit your needs.

What is a Chop Saw?

A chop saw is a type of circular saw that features a lower blade guard and a wider base. The top handle can be easily rotated to provide extra stability when cutting large pieces of wood. It has a lower blade guard because it’s designed for quickly making large cuts in thick or heavy pieces. It doesn’t have the same versatility as a miter saw, but its sheer power makes it ideal for larger projects such as flooring installation, notching joists, and framework.

What Is a Chop Saw Used For?

Chop Saws are used mainly for framing walls and floors (rough carpentry) and any sort of precise crosscutting is not recommended. If you need to make precise cuts, with either an accurate miter saw or table saw.

The most common reason people decide to purchase a chop saw is for framing walls and floors. But because it features accessories such as guide poles and various blades, there are many other jobs a chop saw can perform.

A chop saw is a great tool for notching joists and frameworks, but it has limitations when it comes to making precise cuts (angles). It’s high powered but its heavy-duty frame/stability bar also makes it difficult to move around. Keep in mind that this is not a hand-held tool. You must mount it on a workbench or use sawhorses if you plan on working outside.

If you’re planning on using your chop saw frequently, make sure you purchase one with an anti-vibration feature; this will help minimize the strain placed on your arms while cutting. Chop saws are great at quickly making large cuts in thick pieces of wood, but you can also make accurate crosscuts if you set the blade depth correctly.

Can a Chop Saw Cut Angles?

If you own a chop saw, it should be able to make angled cuts. However, because of its design and lack of an adjustable miter feature, this is not ideal for projects that require precise angles. If you need accurate angles, use a miter or table saw instead.

Which saw is better for cutting certain materials? Let’s find out.

A chop saw is best when cutting through thick pieces of wood, masonry materials, or metal. A miter saw will cut through all the same materials but it isn’t designed for tough jobs so it’s not recommended to use one if you have access to a chop saw.