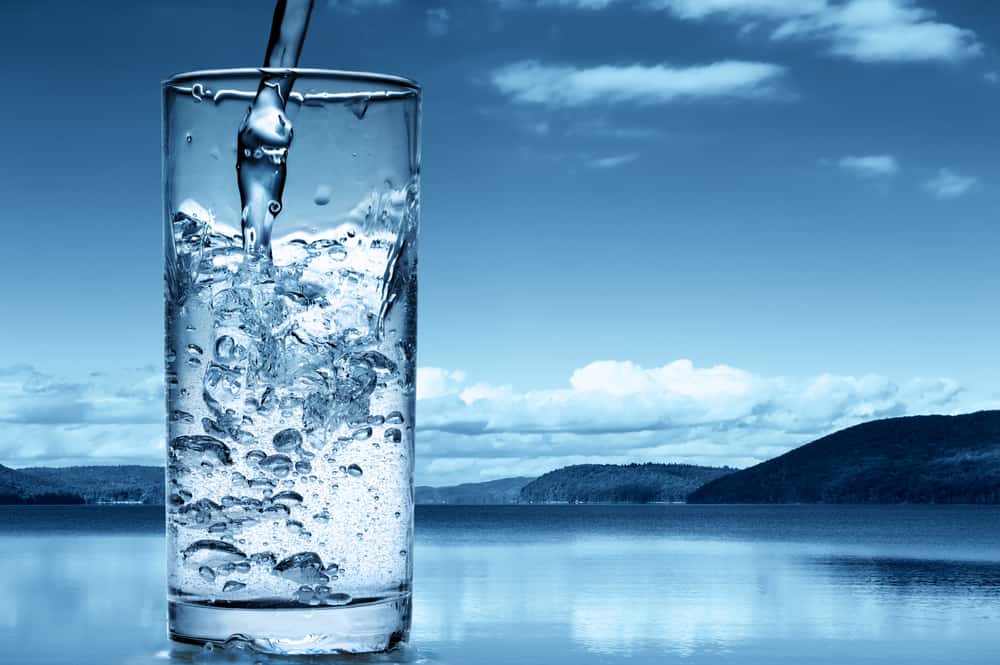 Most water treatment facilities add chlorine to water at some point to remove impurities and water-borne bacteria that transfer diseases.

Although chlorine does not have any harmful side effects at low doses, some studies show evidence of health-related problems linked to chlorine ingestion. And many people do not like the smell or taste of chlorinated water.

In this article, we’ll look at the uses and reasons for the chlorination of water. We’ll also discuss how to remove chlorine from water.

Chlorine is a natural chemical essential for the proper nutrition of people, animals, and plants. When you add chlorine to drinking water, it purifies the liquid, making it safe for consumption.

Although chlorine first appeared in Sweden in 1744, it wasn’t used for water treatment until 1835. At that time, chlorine’s purpose was to remove foul odors (which people believed caused diseases) from the water.

But by 1890, chlorine’s true purpose came to light – disinfecting the water. Great Britain is the first location that started to use chlorine to reduce water-transmitting diseases. Chlorination hit the US in Jersey City, NJ, in 1908, and then in Canada in 1917.

Around 64% of the US was using chlorine water treatments by 1995. Now, it’s the most popular water disinfectant method used throughout the world.

Water companies add disinfectants to water to kill diseases caused by germs and bacteria entering the water at multiple points during the transmission process.

The two major types of disinfectants used to purify water are chlorine and chloramine. However, many water treatment places alternate these two disinfectants based on the time of year.

When water pipes develop biofilm – slime – chlorine isn’t strong enough to kill germs, making it necessary to switch to chloramine – referred to as chloramination. Chloramination is better for treating biofilm because chloramine contains multiple chemical compounds, including ammonia and chlorine.

Monochloramine is the chloramine type most used for water treatment because these compound levels are still at safe drinking levels (less than 50 mg/L) while still killing germs.

Why Is Chlorine Added To Drinking Water?

Water can become contaminated in multiple ways, from the source like wells or lakes or during transportation through miles of piping.

To treat the various contaminants that can form into disease-causing germs, water treatment facilities add a disinfectant to the water system – typically chlorine.

Without the use of chlorine, microorganisms within the water can cause foul odors and tastes. Before chlorine became an additive to treat water, water-borne bacteria were a frequent cause of serious illnesses, such as typhoid fever, dysentery, Campylobacter, Salmonella, cholera, or norovirus.

Chlorine can be used at any treatment process step, from pre-chlorination (applied to untreated raw water or in a flash mixer) or after sedimentation but before filtration. Chlorine added at any stage removes algae and other aquatic life, odors, tastes, and oxidizes manganese, hydrogen sulfide, or iron components.

Most treatment plants use chlorination during the final step to both maintain chlorine residuals and disinfect the water.

Chlorine is a preferred disinfectant, primarily because there are little to no harmful side effects to humans, plants, or most animals at low traces. But water with chlorine traces will be toxic to amphibians, aquatic animals including fish, and reptiles.

Water with chlorine levels that are no higher than four mg/L (milligrams per liter) – 4 ppm (parts per million) will not cause harmful effects to your health.

However, high levels of chlorine can lead to undesired health concerns. Even low traces of chlorine ingested over an extended period can have adverse health effects.

And when chlorine interacts with organic particles in water, it can form trihalomethanes – THMs – including chloroform.

Below are a few health effects you can experience from drinking water treated with chlorine. While it’s generally safe for many people in low doses, long-term excessive use can result in multiple complications.

Some studies have researched the effects of dichlorophenols, chemical compounds also used in pesticides and water chlorination. For example, high dichlorophenol levels in some patients often coincided with food allergies.

A Taiwanese study of almost 400,000 patients produced results that revealed that pregnant mothers who received exposure to chlorinated water containing trihalomethanes had higher chances of birthing a child with a birth abnormality.

Three abnormalities are the most likely – lack of brain development, cleft palate, or ventricular septal defects (holes in the heart).

Can Destroy Beneficial Bacteria In Stomach

Chlorine helps treat bacteria in your water system, but it can also destroy bacteria found in your stomach.

While you may think this is a good thing, it’s not. Your stomach contains beneficial bacteria; when these bacteria get destroyed, it compromises the immune system – which operates from your gut.

A weakened immune system combined with a lack of good stomach bacteria can cause multiple ailments, including diabetes and IBS (irritable bowel system).

In 1995, a study appeared in Environmental Health Perspectives, which suggested a link between water chlorination THM byproducts and cancer (bladder and rectal).

According to this study, it’s believed that these chemicals could account for 5,000 cases of bladder cancer and 8,000 cases of rectal cancer each year.

Subsequent studies imply a link between carcinogenic effects and chlorine, while other studies have not verified such a thing. Either way, more research is necessary.

How To Remove Chlorine From Drinking Water

If you’ve decided that you don’t want to drink water that contains chlorine, no matter the trace amount, there are some ways you can remove this chemical compound.

Removing chlorine from your water using evaporation requires time and patience, as it is a slow but effective process. But because there’s no work involved, it’s also the easiest method.

Chlorine quickly evaporates since it’s highly volatile. To allow any chlorine to evaporate from the water, let the water stand undisturbed. Over time, the water will lose all traces of chlorine.

The exact length of time will vary by environmental conditions. For example, the warmer the air is, the faster chlorine will evaporate. So, leaving the water sitting out at room temperature can make the evaporation process occur faster.

But placing water in an open jug inside a refrigerator can take up to 24 hours for the chlorine to evaporate. So not only is evaporation just as effective as filtration, but it’s also free, whereas it can cost you money to buy a filtration system.

Using a filtration system is one of the most common and versatile methods of removing chlorine from water. There are multiple types of systems, with filters like fluoride or charcoal.

Filters will clear your water of the smell and taste of chlorine while removing impurities and making your water healthier and cleaner. One type of filtration system uses a fluoride filter. But charcoal filters are best for removing chlorine ions.

These filtration systems work immediately, giving you the benefit of not having to wait for the chlorine to evaporate.

But you will have to purchase a system and have it installed, which costs money. And you’ll have to pay for new filters or membranes over time.

A final option is to use a countertop system or filtration pitcher, which is cheaper and does not require permanent installation.

Another way to remove chlorine from water is by using chemical neutralization. This process requires adding additional chemicals that will neutralize chlorine or chloramine.

Some products – like Cambden tablets and sodium thiosulfate – can offset chloramine to create chloride and other beneficial components. But they can also add more dissolved solids like sodium and sulfur.

Chemicals like ascorbic acid (Vitamin C) tablets are an excellent alternative that works as effectively as sodium thiosulfate or Cambden tablets. Still, it has the benefit of not increasing TDS levels.

A water distiller can work to remove up to 97% of chlorine from water. Adding carbon filters can increase the distiller’s effectiveness to 99%.

A reverse osmosis system features a permeable membrane that traps any ions, impurities, or particles – including chlorine – contained in the water.

Membranes made of cellulose acetate require a carbon filter to block pathogens. If you don’t change these filters regularly, they won’t remove chlorine from the water.

Reverse osmosis systems for home use automatically filter your water to remove particles while also softening your water, so it’s not hard water.

But these filters can develop small holes over time, which let contaminants through the filter and into the water. Seals and gaskets are also prone to wearing down, which require repairs or replacing due to leaks.

UV light bulbs produce wavelengths with values of 180 nm to 400 nm. Wavelengths between 180 to 200 nm are ideal for removing free chlorine. But not many people use UV bulbs to remove chlorine from water.

These bulbs are better for removing water impurities by breaking toxins down. But it does not remove the toxins altogether or work very well for dissolved chemicals and metals.

Also, you will need to change the bulb each year to get the right amount of wavelengths.

Instead, you’ll need to allow the water to sit longer in a filtration unit, using a catalytic carbon filter rather than regular charcoal. Whole house water filters using activated carbon (with an NSF logo) can handle chloramine levels from 3 to 0.5 ppm.

Pairing activated and catalytic charcoal for small amounts of water volumes will give you the best, cleanest water.

Boiling water is another effective method for removing chlorine from water, although it won’t remove fluoride. As you boil tap water, the healing process causes the chlorine to form a gas, which separates from the water.

If you’re attempting to heat a large amount of water, it will require excess energy to help the chlorine gas escape. However, boiling water will not remove any chloramines that may be present in the water.

Off-gassing is a helpful method for removing chlorine but not chloramine from water. For this method, all you need to do is leave the water sitting out for 24 hours once it comes out of the tap.

The chlorine dissipates from the water when you leave it uncovered. However, keeping the cover on will not remove any chlorine because there’s not enough oxygen exposure, leaving the chlorine trapped.

This method is a favorite for many people because it’s free and simple. In addition, it’s an excellent way to remove chlorine from the water you’ll be using in fish tanks or for beer brewing.

There are also reputable chlorine water filters formulated explicitly for removing chlorine from water. You can add these filters to water pitchers, faucet filters, or whole home filtration systems.

How to Get Chlorine Out Of Water FAQ

How Do You Remove Chlorine From Tap Water?

The easiest and fastest way to remove chlorine from tap water is to boil the water for 15 minutes. You can also use filtration systems with charcoal, activated carbon, or chlorine water filters.

How Do You Remove Chlorine From Water Naturally?

Boiling the water is one way to remove chlorine from water naturally. And so is leaving the water sitting out over 24 hours.

How Do You Get Chlorine Out Of Water Fast?

The fastest way to remove chlorine from water is to use a filtration system. Filters can remove all contaminants, including chlorine, instantly. Boiling water only takes 15 minutes to make it chlorine-free.

Leaving water sitting out uncovered can cause chlorine to evaporate from the water, leaving it unchlorinated. But the process does take a long time, up to a full day (24 hours).